It has been great to be recognised for all of the hard work and dedication that each and every one of our team at Playdale have put into making the business a success. We’ve had some fantastic press coverage over the last few years and we’ve been delighted to pick up some awards along the way. 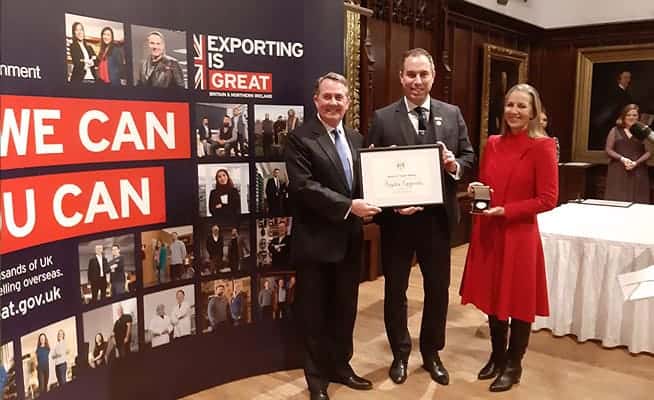 International Trade Secretary Dr Liam Fox MP recently presented Playdale’s MD Barry Leahey with a BOFTA (Board Of Trade) award which is in recognition of our excellence in international trade, our innovation, creativity and entrepreneurialism. You can read more by clicking here. 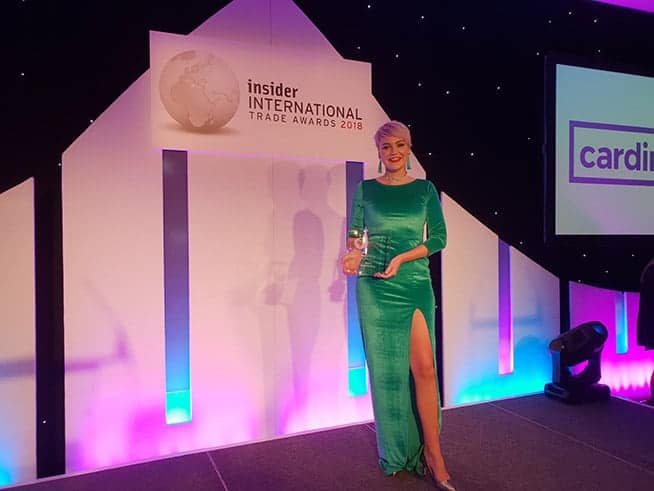 There was a triumphant win for Team Playdale at the recent Insider Media NW International Trade Awards, held at the Lowry Hotel in Manchester. Here’s our Export Account Manager Stephanie proudly holding the ‘Team Of The Year’ award. The judges said they picked up on ‘real passion & a great atmosphere’ in our company. ‘We all can work…but together we win’ 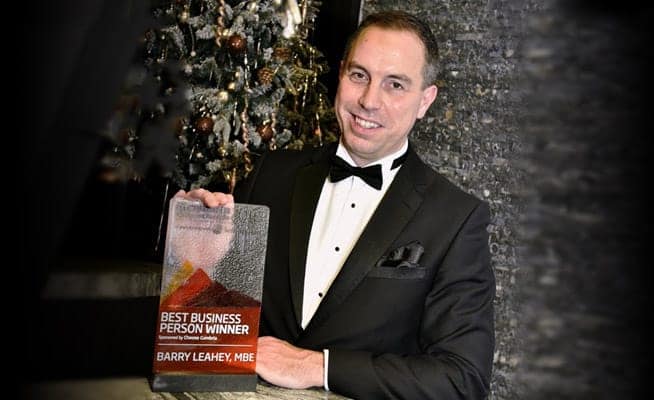 The elite of Cumbria’s business world was celebrated last week at a dazzling award ceremony hosted by TV & radio broadcaster Jeremy Vine. The in-Cumbria Business Awards were held at the Halston in Carlisle where over 250 prominent business leaders enjoyed an evening of recognition and celebration. One of the most illustrious honours of the event was the Business Person Of The Year award which we are extremely proud and delighted to announce was presented to our MD.

The Manufacturer Top 100 salutes the most dynamic leaders and innovators in manufacturing, offering role models for a vibrant future to those who once thought manufacturing in the UK is a thing of the past. The Top 100 project publicly recognises the heroes of UK manufacturing, those who stand out for their contribution to changing the face of industry; finding new markets; making a marked investment in people, processes and customers, or for making an impact disproportionate to their years. 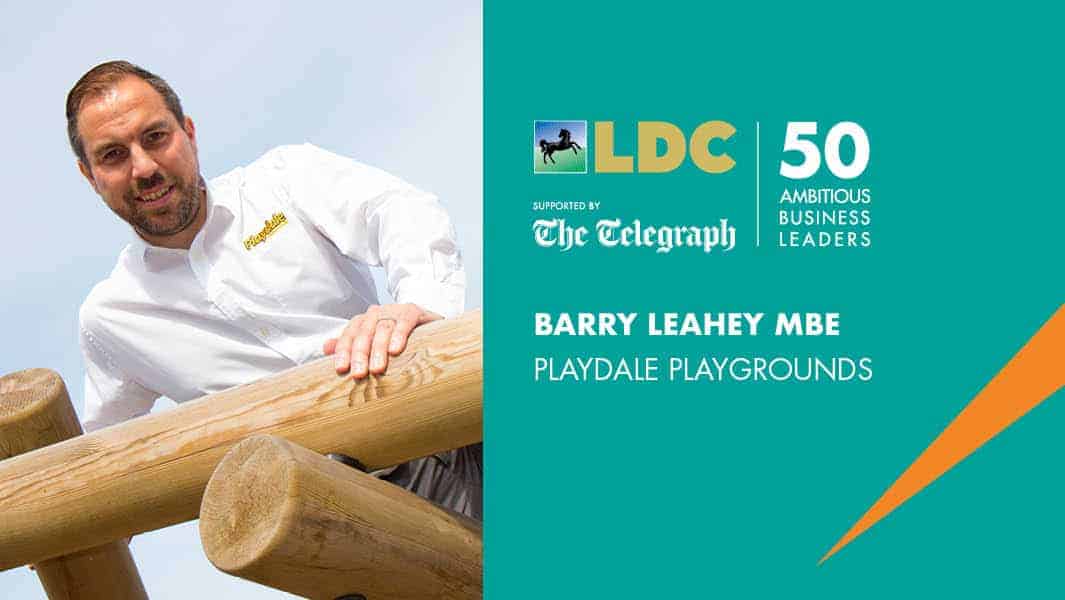 Our MD Barry Leahey has been named in the ‘World Beaters’ category of the *LDC’s Top 50 Most Ambitious Business Leaders list, supported by The Telegraph newspaper. This category features business people who have taken their businesses into new and untested international markets which takes courage and perseverance (particularly in unsettled times). You can read more by clicking here.
*LDC is Lloyds Development Capital Limited,  a mid-market private equity house and subsidiary of Lloyds Banking Group

Playdale is a Department of International Trade Export Champion

The Exporting is GREAT campaign is a movement that inspires companies to sell overseas. Playdale has actively shared their export success stories, challenges they’ve faced and provided tips on how to overcome them or where to go for help. This inspiration helps other businesses achieve growth and become more productive. Basically, it’s about letting them know that Exporting is GREAT! 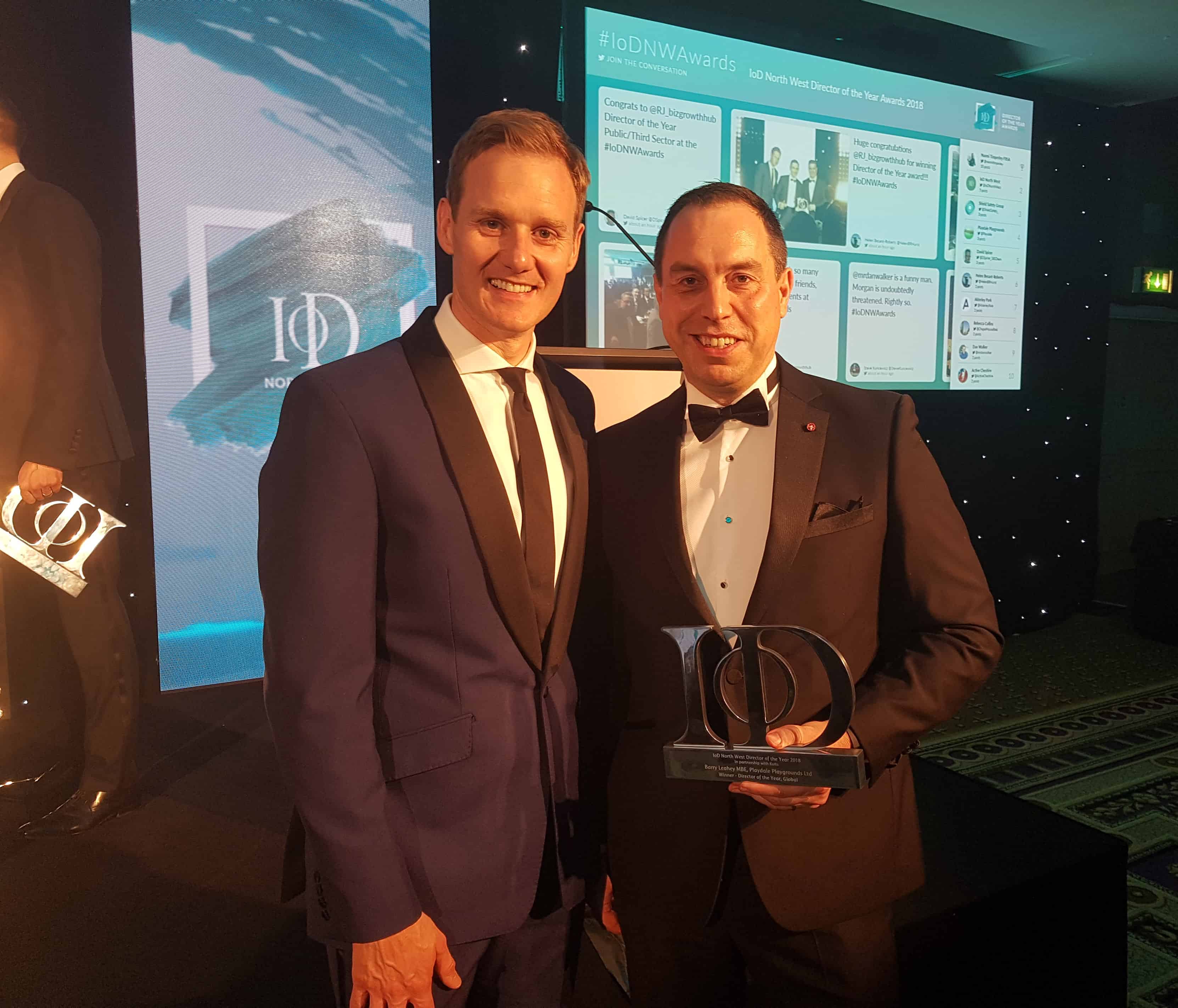 Playdale Playgrounds’ Managing Director, Barry Leahey MBE was awarded Director of the Year in the global category at the Institute of Directors (IoD) North West Awards in May this year. The event was hosted by a familiar face to many – BBC sports presenter and anchor of BBC Breakfast, Dan Walker. Click here to read the full story and see more images.

Our Managing Director Barry Leahey was in London in April attending the Commonwealth Heads of Government Meeting 2018 (CHOGM). This event brought together representatives and leaders from the worlds of business, civil society and government to address the shared global challenges Commonwealth countries face. Read more here. 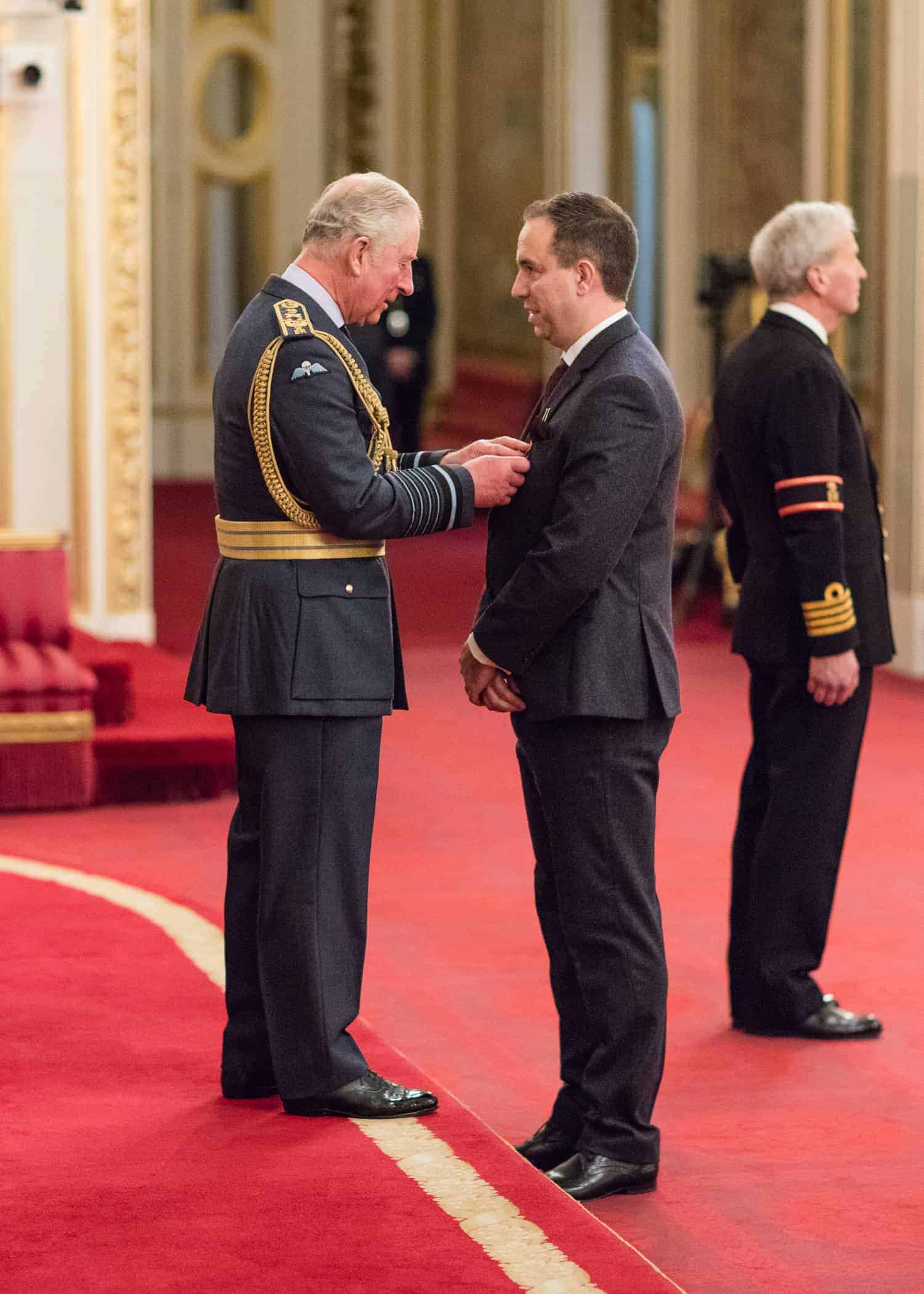 Mid-2017 we announced that Barry Leahey, Playdale’s Managing Director, had been named on the 2017 Queen’s Birthday Honours List to receive an MBE for ‘Services to UK Trade & Investment and Exports’. The definition of MBE is Member of the Most Excellent Order of the British Empire. Barry has been the driving force behind Playdale’s growth strategy and has successfully formed distribution agreements in 46 countries in less than 7 years. Read and see more here. 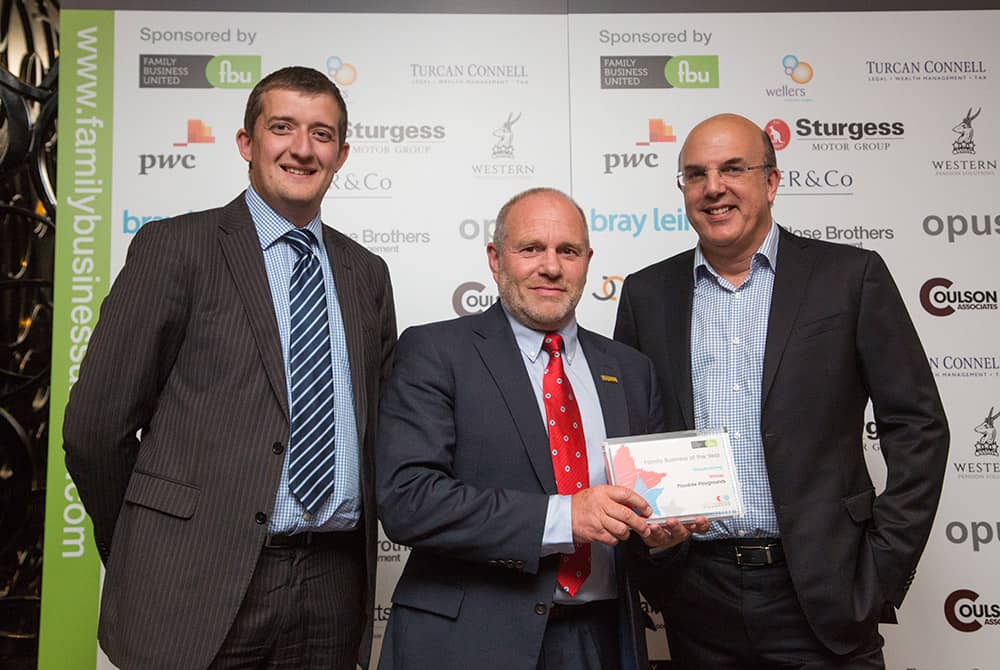 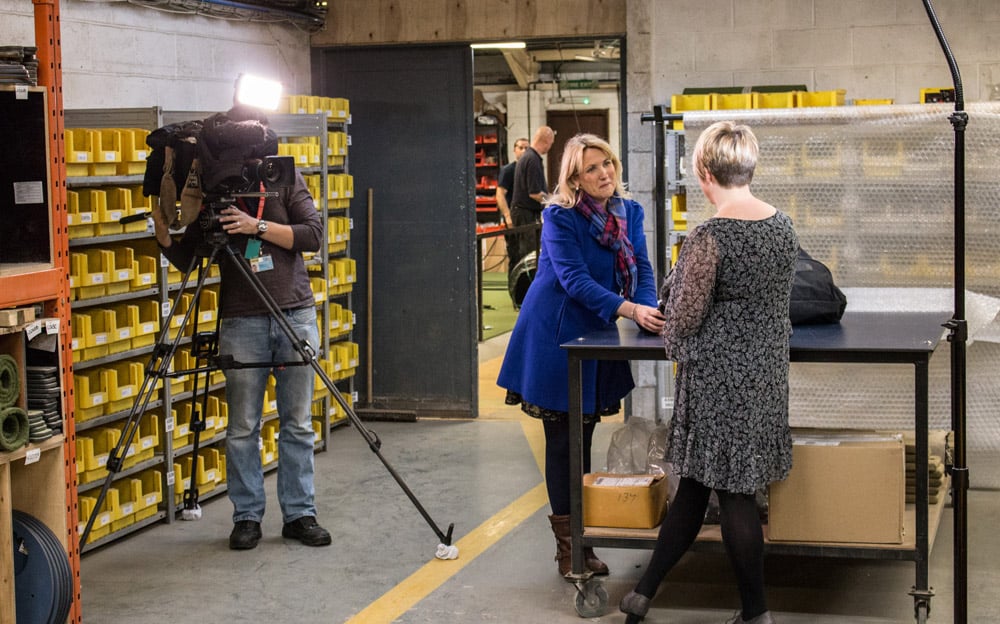 We were happy to welcome ITV Border News to head office to talk about our export success. 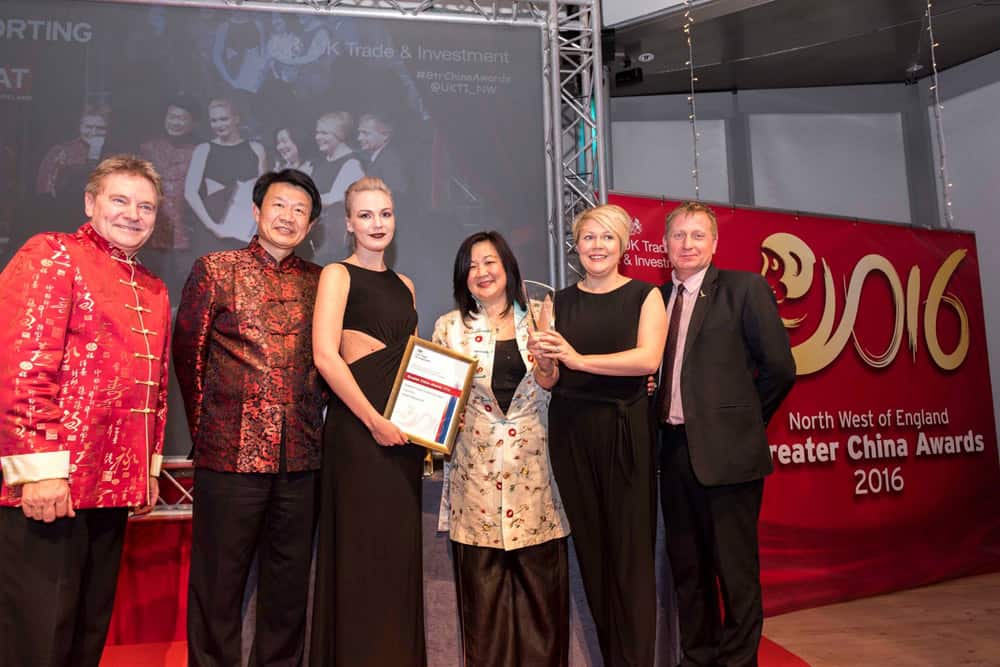 A great night was had by all at the UKTI’s North West of England Greater China Awards 2016. Here’s our Export Account Manager Stephanie Tootill and Export Coordinator Sarah Spencer with our award for runner up in the Rising Star category. Well done to all involved! 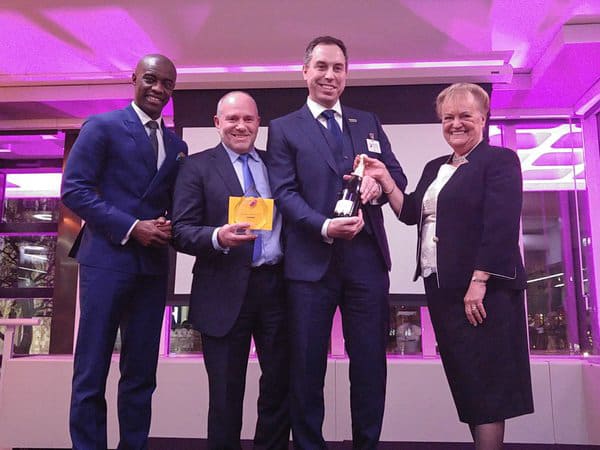 We were extremely happy and proud of the whole Playdale team when we won the National Business Exporter of the Year award at the FSB Worldpay UK Business Awards 2016. Read more.

We were delighted to win the Exporter of the Year Award along with our very deserving export account manager Stephanie Tootill winning the Rising Star award, at the CN Group Business Awards 2015. Read more

Winner of the Emerging Exporter Award 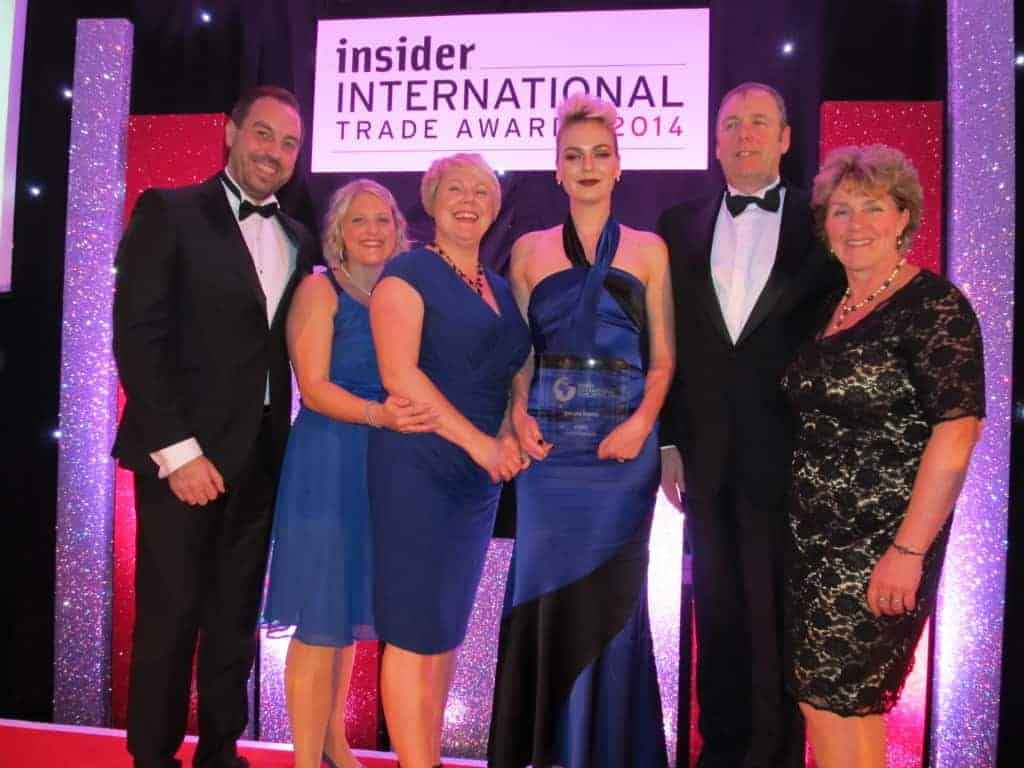 We were immensely happy and proud to win the Emerging Exporter Award at the Insider’s North West International Trade Awards 2014. Read more.

We were chosen as one of the businesses to feature in the UKTI’s ‘Exporting is GREAT’ national campaign. Read more.

We are very proud to be named as one of the top 30 Export Champions in the North West for three years running, and we are one of Cumbria’s most successful exporters. Read more. 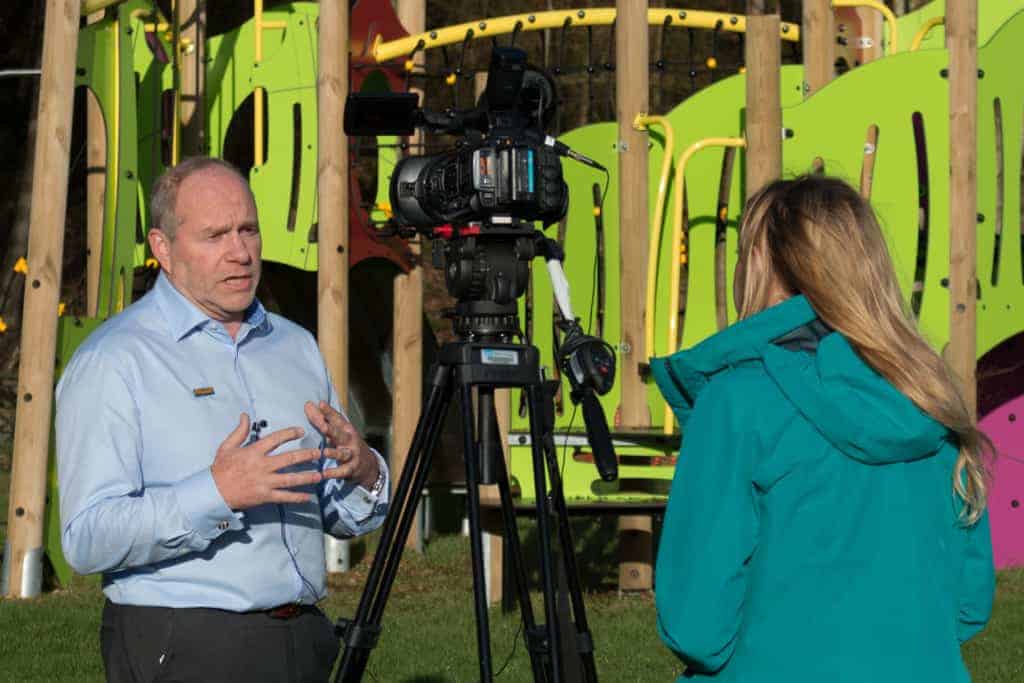 On the back of our export success we were delighted to be featured in a report for ITV Border news which was broadcast in January 2015. Read more. 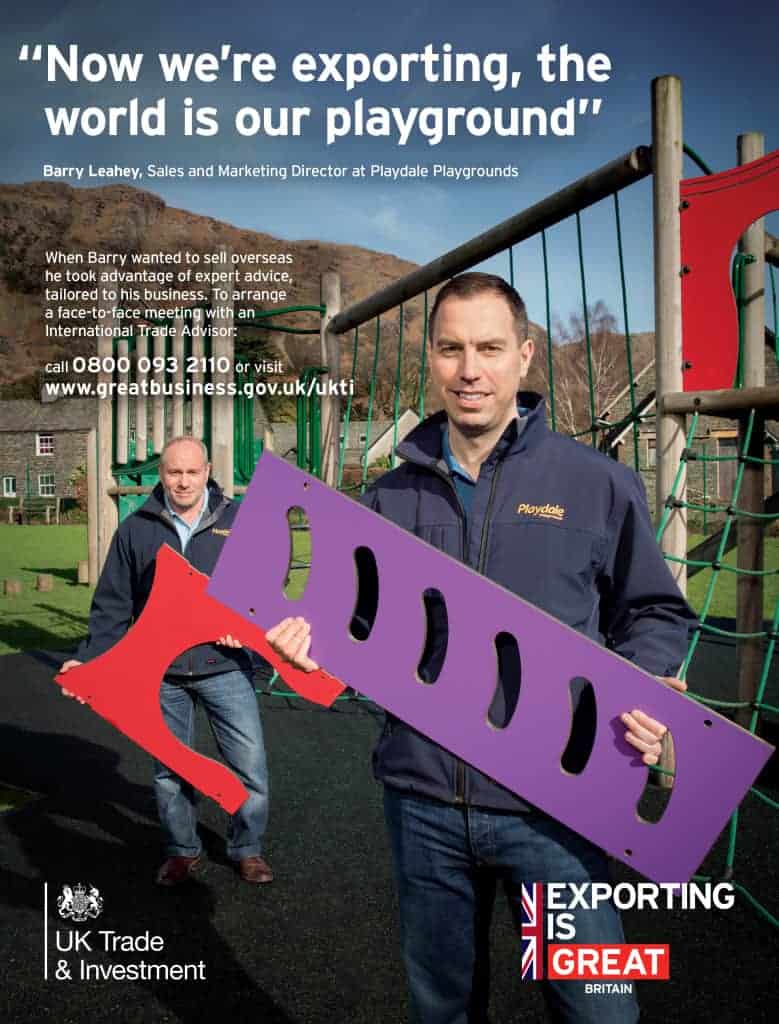 We were also featured in the Financial Times, The Spectator and a number of national publications for UKTI’s Exporting is GREAT campaign.