Patience paid off for the residents of Bala Our regional manager for the North, Paul Battye had previously worked with a client in the Meirionnydd area and they kindly recommended us to Buddug Williams and Lorraine Rees Pritchard of the Castle Street Playground Committee who were hoping to build a playground in the north part of Bala. Paul met them at the disused, former playground site to discuss their project and carry out a full site survey.

The six strong Castle Street Playground Committee worked tirelessly over a period of four years to campaign and raise funds for this project. Although they modestly insist it was a big, joint community effort.  Back in 2011 the original play area on this site was uplifted and removed as it  had come to the end of its life and was in such a state of disrepair, that is was classed unsafe. The local community were devastated to lose their play area which was such an important social hub and facility for families living in the area. Not only that, but the derelict site was a real eyesore in the locality.

All the necessary funds had to be raised by the committee as the land wasn’t owned by the council. Incredibly, they managed to reach the final of the Lottery funded People’s Millions. This was testament to the commitment and dedication shown by all members of the committee and the local community. It was a tough battle but they persevered and it certainly paid off when they received an amazing grant of £50,000! Overnight, their dreams for a new playground were becoming a reality. The additional £25,000 needed to get the project up and running was raised by an outstanding number of local fund raising activities such as cake sales, quizzes and generous donations.

Following Paul’s consultation and survey our design team set to work on drawing up our playground proposal including a scaled plan, tailored quotation, artist’s impression and photographic visuals. The committee were impressed with the proposal and following a few minor amendments, they placed their order with us. We were delighted and excited to be able to help them transform this unsightly derelict former playground into a fantastic new play area for the whole community.

The equipment included in the design includes a Nimble Plus junior multi play unit from our Jukebox Plus range, a Giggleswick Plus toddler multi play unit from our Little Hamlets Plus range, a stainless steel City Swing with cradle seat and junior seat, an Inclusive Orbit roundabout, an Aero Tilt, a stainless steel City Team Swing, a Twin Rider and a Mirror Play Panel. The eye catching surfacing was an entire area of different colours of Playdale Bonded Rubber Mulch.

Following the installation the reaction and feedback was superb. Lorraine said,  “I have to thank you so much for your expert guidance with the assistance you gave us for the choice of equipment, you were spot on, and could not have done it better. The Playground has made a huge difference to the community and the children love all the equipment. Please congratulate your designers.” 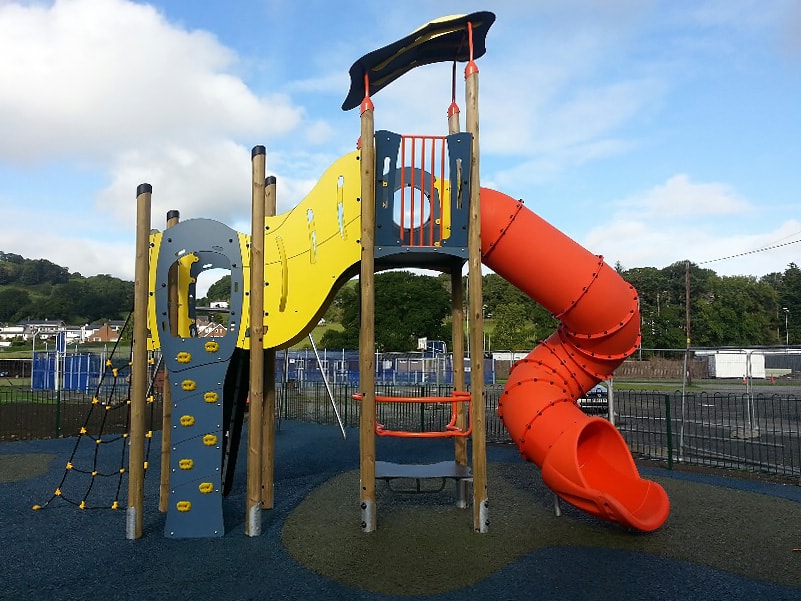 The S4C children ‘s television star Dona Direidi officially opened the park and there was quite a festival feel in the air. Further plans are in place for a new picnic area in the near future along with inclusive access to the park to complement the inclusive roundabout and inclusive team swing items.

Lorraine added. “It’s such a real treat for the whole community who worked so hard for this.”

If you would like to arrange a free, no obligation consultancy meeting and site survey with your local area manager, click here. We look forward to hearing from you.