Location: Sutton Benger Village, situated between Swindon and Bristol on the M4 corridor

Sutton Benger is a medium-sized village of about 2000 people of all generations. Like many villages of its size it has public houses, a small hotel, a primary school, a restaurant and until recently a rather run down playground.

Richard Whipp is a resident of Sutton Benger and it was following the birth of his first child that he became aware of the lack of playground equipment and general poor state of repair of the village play area. He discovered a playground refurbishment project had been started, but had never really gained momentum.  Richard volunteered his services, and soon realised that he needed to take matters into his own hands to get the project off the ground!

He told us, “I have never managed a project before as my career was in the Armed Forces (RAF). I have an interest in DIY and experience in man-management at work but essentially this was ‘have-a-go’ territory!”

Everyone was in agreement that as a community, they had the capability to carry out the groundworks and equipment installation themselves, which meant that the majority of funds raised could be spent on purchasing as much actual playground equipment as possible.

Upon first thorough inspection his findings were that the playground had a corroded stand-alone slide, two sets of 4-seat swings, a roundabout that didn’t spin, two broken benches, a springy hippo, a damaged climbing frame and a bin! There were no pathways and moles in the area made the ground muddy in wet conditions. 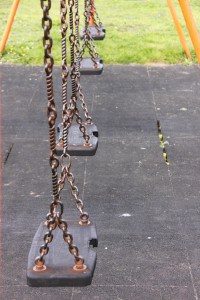 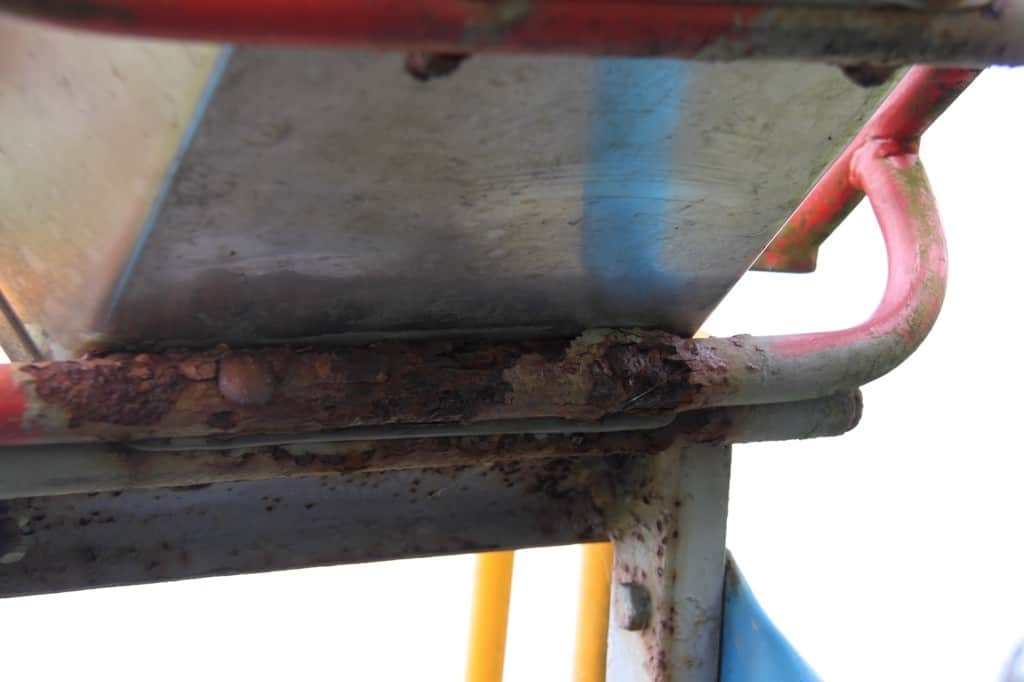 So the first step was to start trying to gather funds to pay for the project! Funding came in from many different avenues and activities thanks to a lot of hard work and effort by many members of the community.

There was an initial grant of £1500 from the Village Hall Committee, and some additional funding within the Parish Council accounts which gave the project the green light to start moving. The playground improvements were planned with a staged development approach. The visible work beginning seemed to encourage community involvement, which in turn encouraged fundraising support and fundraising itself. Community members, not linked to any village groups or committees, organised fundraising events such as a dance and crafts sale whilst other pre-planned village events (Remembrance day evening dinner, a beer & sausage festival and Bonfire Night) donated their  profits to the project.

The local church charity and the local council made two significant contributions. Funding was also secured from private companies including Lloyds Banks, Aviva and Waitrose, there were local funding initiatives and the PRSC also organised a raffle (with prizes donated by local businesses) and a fundraising meal in the local restaurant.

Funding also came in the form of two significant grants from the Big Lottery Fund and Community First. There were some privately-made contributions and donations of materials from local companies. In all, about £62,000 was raised for the project. A pretty impressive amount to have been raised by a small village community! This demonstrates how important this project was to so many villagers.

The community were not only actively involved with the fundraising stage of the project, but there was always a good turn out on installation and refurbishment days. 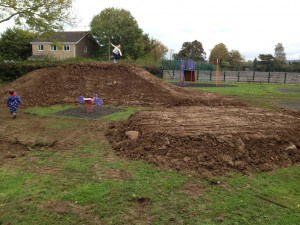 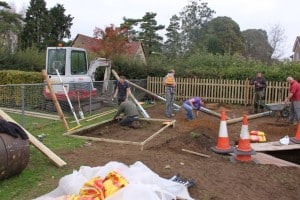 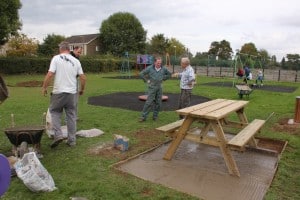 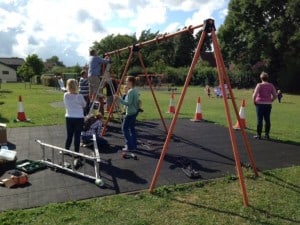 Decisions on equipment that was to be purchased were also made as a community. A survey was completed at the start of the redevelopment process and the general consensus was that ‘natural’, timber equipment was preferable. Richard researched lots of different play equipment companies but in the end opted for Playdale as the chosen equipment supplier. Richard explains why he chose us, “Playdale’s equipment looked sturdy. I visited many sites to examine as many items as possible. Their timber equipment has a twenty year guarantee which is one of longest in the industry. The ranges and choice was impressive and I like the flexibility of being able to modularise some pieces.”

To keep the natural look Richard and the team chose to put in some soft landscaping in the form of hills. This allowed an Embankment Slide and Canyon Bridge to be installed. Monkey Bars were added to replace the monkey rings that were removed from the climbing frame and they also installed a timber Team Swing. It was felt that a stand-alone toddler area was needed so a custom designed Brook Plus from our Little Hamlets Plus range was built into the design.

Richard carefully chose and installed seating, shelters and extras in the form of three Lakeland picnic tables, two Litter Bins and a Timber Shelter (after identifying that there was nowhere to shelter from the sun or a shower!) A small trampoline and a Cone Climber completed the equipment selection. 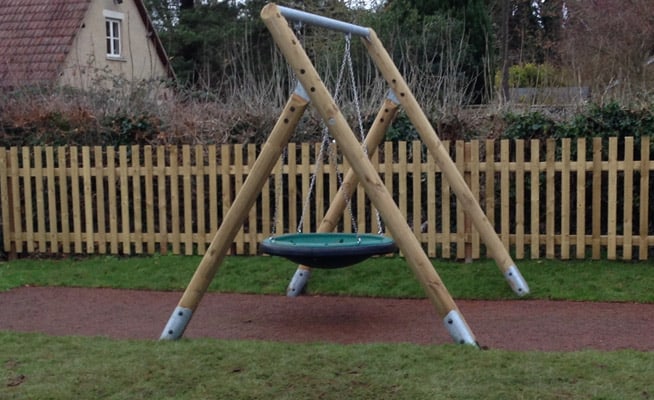 A great touch to the site was when they planted five trees in National Tree week and each was paid for and dedicated by members of the community. Bonder rubber mulch safety surfacing was chosen for this site. It is hard wearing, cost effective and retains the natural look of an area. A path linking the equipment and the mulch safety surfacing finished the area off and gave Sutton Benger something they had never been lucky enough to have – an all-weather park.

Richard describes how the shortlist of equipment was reached, “The equipment selected was balanced between variety, need to address each age group and space available – because we kept and refurbished some equipment we had to fit things into the available space. I drew up the plan and the Playdale team refined the design.”

The play area has now been fully transformed and is almost unrecognisable from before. The timescale for the whole project from beginning to end will be approximately two years. The playground will be handed over to the Village Hall Committee for ongoing responsibility and maintenance. Richard told us, “I have seen the number of people using the playground increase exponentially – people also travel from Chippenham Town and surrounding villages to use the area. After school hours the playground is full of children from the local primary school and this is the age group we targeted – it is also well used at other times by the pre-school and local child minders. I have noticed that people come down in weather conditions that previously would have deterred them from doing so – the outdoor shelter provides good protection from strong sun and passing showers. Many in the village have personally thanked members of the PRSC and seem genuinely impressed at and thankful for what we have done; it is recognised that these things do not happen by themselves and a lot of hard work is required.” 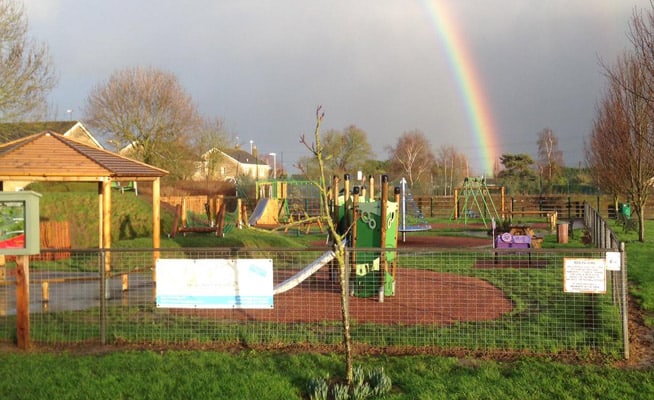 We think that this is a truly inspirational story and proves that with determination, hard work and patience, communities can work together to build playgrounds to be loved and enjoyed by all.